This morning when I opened microsoft word I found all of the end note citations in all of my files were suddenly not formatted. All the citations and bibliographies were working fine for the last 5 years. I haven’t made any changes to endnote or word in the last year, let alone last night. I haven’t changed the output style, ever. There is no reason for it to suddenly have this problem. I have since tried deleting and reinserting a reference, to see if it would fix the problem, but the new citation went in the same way (unformatted). I tried changing styles to see if the problem was with the output style, but the same problem occurred with the new output styles,

Any help anyone can offer will be very appreciated. 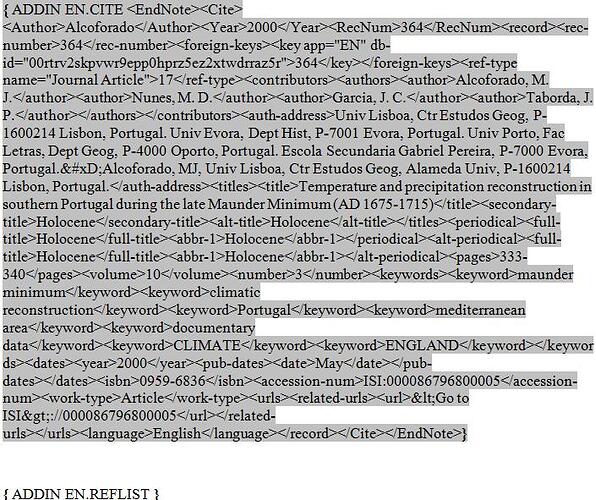 This is a Word setting “Show field codes instead of their values.” This typically gets accidentally invoked by pressing the  - “Alt +F9” key combination. If you hit this key combo again, you should see your EndNote in-text citations formatted again.

Thank you soooooooooo much.  You have saved my sanity.  I have no idea how I managed to simultaneously press those two buttons without noticing :-S

This is a very common mistake that causes much confusion and consternation for EndNote users. Starting in version X3, we actually added a preference in Cite While You Write that tries to automatically turn this Word function off - see the attached screen shot. Since we added this, we get virtually no calls in Tech Support about this so it seems like it is helping. 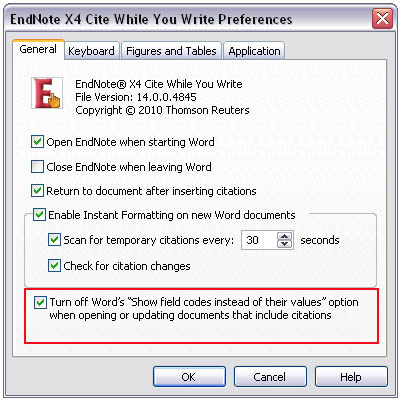