After the release of WINE 1.3.13 yesterday, I downloaded it and installed it (Direct from browser or after:

After a new start of Ubuntu, EN X4 was installed without uninstallation of EN X3.

EN X3 has disappeared and only EN X4 can be seen in Wine folde r. Configure EN X4  started successfully too. Please note that it is a test concerning the start of the configuration files. Word Office is not installed in Wine  folder. 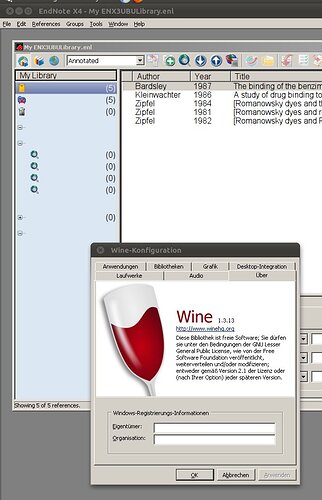 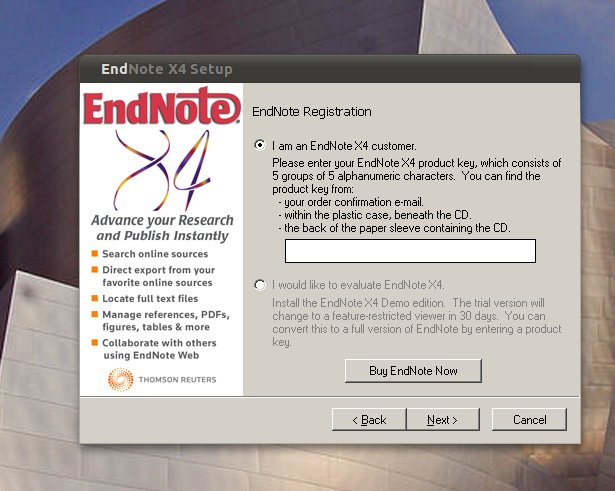 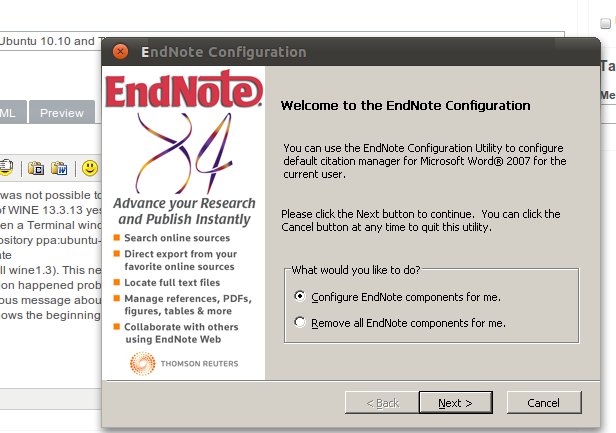 I just install wine 1.3 and ran the update to endnote 4.0.2 in Ubuntu 10.10 with the Wine PPA added to my repos. I also ran the 2 winetricks commands you said to run but now I cannot open endnote.  WhenI clikc on it it opens in the menu bar but nothing happens and eventually the menu entry goes away.

With Wine1.2 and Endnote X4 it opened but some of the text didn’t display properly.

Have you bought the the EN X4 without patches or with patches?

If you read my previous messages with screenshots, you can see the missing text parts too. The same occurs with the new Suse 11 and other linux distros.

With EN X2 the text can be seen but not with ENX3 and X4.

I probably should have posted in this thread:

I followed those instructions…

"There are no plans to create a Linux version of EndNote. Our Web-based
bibliographic tool, WriteNote, works through a Web browser on all
platforms - including Linux.

We do hear requests for CWYW plug-ins for many different word processors
fairly often and we would love to be able to accommodate this - but this
is just not economically feasible. The MS Word CWYW plug-in is over 1
million lines of C++ code that would need to be heavily customized, and
tested for each application. We just do not have the staff bandwidth to
do this for all [or even some] of the other popular word processors."

At this time and with the new WINE 1.3.13, one can see that the version EN X3 and X4 are slight, slight shoddy programmed. Why?

I received an EN X2 upgrade as generous gift from Thomson Reuters for my ENX2 beta testing several years ago.

This version shows all the texts (Screenshot 32) with Ubuntu10.10. The same screenshot was obtained 2009 with

According to my previous messages, the text disappeared when the EN X3 e.g. X4 are installed.

X4 icon appeared as add-in in Word 2007 but yielded a severe error (Screenshot 29 in German) and Word 2007 crashed  (translation of the screenshot : The CWYW add-in must be desactivated). After desactivation, Word started correctly.

Another interesting feature concerning the configuration of Wine 1.3.13:

If you select the  riched20.dll  and install it in Wine, your PowerPoint will run correctly but EN X4 and other versions cannot be started!!!

Please NO INSTALLATION  of this library!

you say in your last message that you followed this instructions:

I followed those instructions…

The cited URL  http://ts.lithium… uses the winetricks riched20. Your first enquiry corroborated my own findings:

you must uninstall the riched20 and,  if installed,  the riched30. After a new start of Ubuntu ,  EndNote X4 will start problemless. If you need help for the uninstallation of these DLL,  please tell me.