After pdf file attachment to any reference, if Find Full Text funtion is unfortunately applied to exactly the same reference, there would be two pdf file attached to the same reference. This sounds to be pretty cool up to now, however, if you try to open any of these file, the endnote X4 would be frozen and no pdf file would be able to be opened. And you have to delete both of these two files, and file need to be attached again.

This seems to be caused mainly by Find Full Text funtion since i had two files attached to the same reference manually without any problem. Thanks.

Clearly this does not sound right so we will have someone investigate and be sure to add this to our internal bug database.

But, if you already had the full text PDF attached to a record, why did you then run the Find Full Text feature and add another copy of the file - was this on purpose?

Of course I’m not trying to find trouble for myself or trying to look for bugs for you guys. Sometimes I forgot that some of the reference in the whole group already had attachment, or sometimes just for convenience, I just select all of the references in the group, then clicked find the full text. I did NOT expect this is going to happen. Thanks anyway.

I am unable to reproduce this error (X4, Windows XP).  Either by immediately rerunning the find full text, or by trying to apply it later to the same record.

My system configuration: windows 7, acrobat 9.3.3 with endnote x4. After uninstall endnote x4 and acrobat 9, I run a clean install of acrobat 9.3.3 then endnote x4, this bug still persist. And it did not necessarily happen at the situation i reported at the beginning. For random reason, one record with pdf file attached (Only one pdf file) could be frozen when trying to open it. However, after delete the specific file, reattach it back to the record, it seems working. Right now, I did NOT figure out any specific reason or pattern why this would happen. However, it’s pretty annoying since I have NO idea why this would happen and how to end this dilemma. Thanks you guys 4 ur time reading all these. 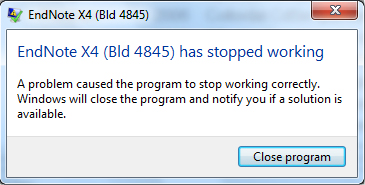 FYI, I found somebody else may encounter similar situation: (I have some similar situation in this thread that some of my record with attached pdf file will show up as exactly the same as “This URL(\) could not be launched”)

I have plenty of these files and don’t wanna to reattach it again, then found it defective some time later. Could you please fix this bug? Thanks.

Re: Endnote X1 file attachments error - “This URL(\) could not be launched”

I am a student and fairly new to EndNote, but I am having this same problem with EndNoteX3 on a Windows 7 machine. I have tried the batch file work-around and I still get the same error message. I have found that if I clear the attached PDF and reattach it, it works just fine (for now…), but I’m not going to manually reattach the PDFs for >300 articles. Does anyone have any thoughts as to why the batch file trick didn’t work, or another method for fixing this problem? 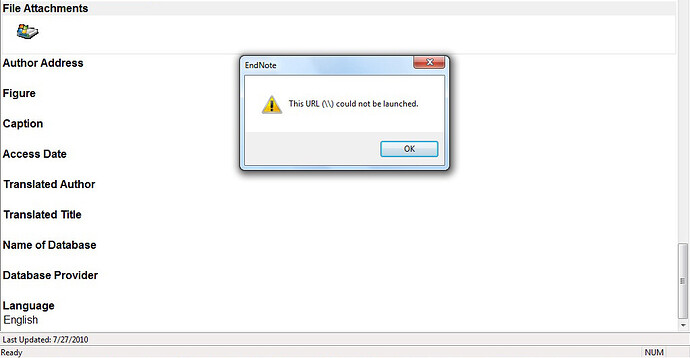 We have not been able to reproduce this issue internally. We have seen Find Full Text download the same record more than once in rare instances - which it is not supposed to do. So, I have flagged this to be looked at for an upcoming update patch for EndNote X4. But crashing or freezing related to not being able to launch a URL is not something we have seen. Here are a few follow-up questions that might be helpful:

Feel free to send answers and/or samples directly to me.

Adobe acrobat 9.3.3 is the only one and the default.

All libraries. Although only part of the record in these library will have this problem. All these libraries are located at local hard drive, not really deeply-nested. Around 3 level of folder tree.

I have seen freezing/crashing occur on both situation and did NOT see any pattern yet. Besides, you may see the screenshot I posted before this in the same thread, there is another “This URL(\) could not be launched” problem happening randomly on the attached pdf file.

If there is any other info you wanna to know, free to ask. Thanks.

I carefully read the http://community.thomsonreuters.com/t5/EndNote-General/Endnote-X1-file-attachements-error-quot-This-URL-could-not-be/td-p/531 again, think this may be the reason:

Re: Endnote X1 file attachements error - “This URL(\) could not be launched”

I found the reason now. When insert PDF with long name, sometimes Endnote copies and cuts the file name to “…~1”, but the URL is still using the full name.

Hope this bug can be fixed soon.

I don’t know if this will “fix” files that may be “renamed” by Windows (I think, and not by Endnote), but I suggest you perhaps adjust the folder names to be really short, make your library name really short, avoid putting  the library in any “my document” type folder location which includes a windows path addition with the whole “documents and settings/username” folder structure.  For example, my library is on my H:Library folder.

It is Windows that has a file limitation that includes the path/folder names.  What would help is if Endnote somehow advised the user with an error message that was meaningful to warn that the path is approaching the window filename character limit I guess?

I’ve been having the same problem, and found this thread by googling the error message. The longest pathname in my library is 215 characters, so I think the suggestion that path lengths are the cause of the problem is a red herring.   Anyway, shouldn’t endnote be using relative links, so pathname lengths aren’t relevant?

I’ve got >500 references in the library, most with some sort of attachment, so re-doing them by hand isn’t an option.

Oddly enough, getting rid of Adobe Reader 10.1.0 fixed the problem.  Merely uninstalling and reinstalling Reader didn’t help, but setting Sumatra PDF reader as the default has fixed the original problem.