How to edit the Chicago 16th Style in a better way?

The editors require us to use Chicago 16th Style, but their example is different from the default format, so…

Lyons, Christopher, Definiteness, Cambridge: Cambridge University Press, 1999, 122-201.
ps I’ve tried to edit the style in the templates, but all the punctuations were too delicate to change manually. Is there any better way like “find and replace”?

Any help would be much appreciated!

ITEMS #1 and #2:“Find and replace” isn’t a current option when modifying the citation/bibliographic templates but modifying the templates requires careful scrutiny rather than a quck change.  The reason is that the templates are carefully constructed so that commas and full-stops (periods) will either be displayed or not displayed depending upon what’s in the corresponding EndNote fields in the reference type.

To modify the book template, it might be helpful to first begin by deleting unused fields (i.e., fields which are not in used by the current references - for example, if your references do not involve Translated Title, Translated by Translator, etc; then delete the fields).  Once the “clutter” has been removed, it’ll be easier to determine what should be changed.  An alternative method would be to build the template from scratch by clearing out the template then re-constructing it based on the fields represented by your current references.

As an example of modifying the Book template, see the attached output file. Commas were inserted to achieve the effect of your “Lyons” entry along with the pages listed at the end (refer to bottom of attached image).  Full-stops (periods) were repositioned inside the “Forced Separations” and may impact other references so check other references to see if the template changes are correct, if not, further modification is needed.

ITEM #3: The reference title may be changed via EndNote’s “Format Bibliography” dialog box which is accessed via MS Word.  (Refer to attached image for directions.)  The dialog box allows renaming the title but does not permit changing the alignment from center to left.  Suggest leaving the title blank and just manually typing in “References” then left-aligning it yourself.

The answers are excellent and the modified template works well, but I’ve got a new problem. The in-text citation disappears in the Chicago 16th A (original and modified) but it comes back in the Chicago 16th B style. I did not exclude the author and year. Do you have any clue of what’s going on? Thanks very much for your help!

If you opt for the latter of modifying the Chicago 16th A (original or modified file) citation template  you can follow the layout used for the Chicago 16th B template.  Go to the EndNote toolbar, select EDIT, OUTPUT STYLES, EDIT [name of the file]. In the style’s dialog box, locate  “Citations” in the left column and click on Templates (see attached image). Then enter the field information as displayed in the attached image (which shows the citation template layout for Chicago 16th B). Also note that the “multiple citation separator” indicates a semicolon followed by one blank space. Close the output style to save the changes.

The reason they “disappear” is because Chicago 16th A is set up as a footnote style and follows the footnote criteria and Chicago 16th B is not.  To get them to number in 16thA, you need to use Word to insert a footnote and insert the endnote citation into the footnote.

Your inputs really helped me; my EndNote Output was not separating in-text citations for Chicago 16th B using semi-colons. I fixed that. However, now, I notice that there is no space separating the citations. It reads as follows:

How do I maky my EndNote X6 put a space between these ciations while using Chicago 16B? It adds the space without a problem when I use APA.

Thanks so much in advance for your help.

Your inputs really helped me; my EndNote Output was not separating in-text citations for Chicago 16th B using semi-colons. I fixed that through your advice. However, now, I notice that there is no space separating the citations. It reads as follows:

How do I maky my EndNote X6 put a space between these ciations while using Chicago 16B? It adds the space without a problem when I use APA.

Thanks so much in advance for your help.

When you add the semi-colon in the output style, you also need to enter a space after it. 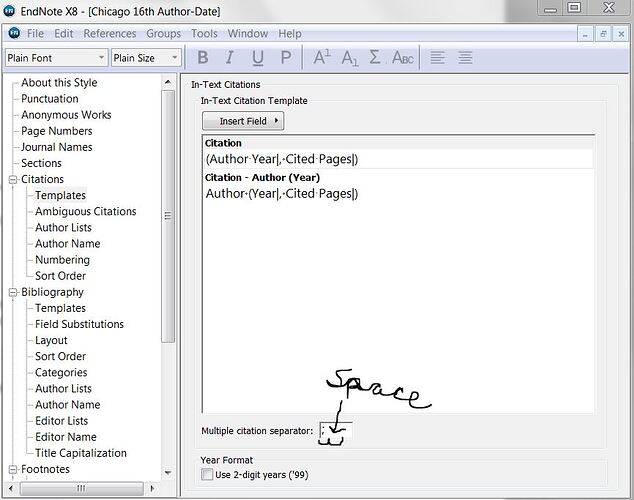