How to enter an edited book (as a whole, not a book section)?

Hi, I have been really struggling with quoting the whole edited book. I use APA style.

If I enter all the details as required in Endnote (choosing a book and writing editors where editors are named), then this is what I get in references:

NO EDITORS at all.

Moreover, this is what appears in text: (Translocal China: Linkages, identities and the reimagining of space, 2006)

Those version are incorrect as editors are supposed to be mentioned.

If I write editors as authors and add (eds) at the end,eds is perceived as E. (I guess a part of a name?)

If I write (eds) as a new line in endnote, it is treated as a new surname.

I am really stuck! Please, help!

there is a reference type called Edited Book and you should use that. It has a field called “editors” rather than “authors”.

You shouldn’t have to specify the ed. parts as they are produced by the output style itself.  the attached record would be formated as 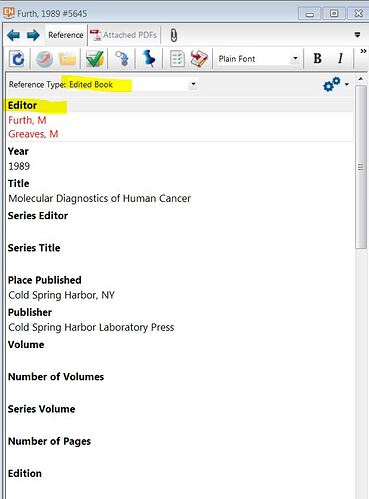