how to remove spaces

Hello, Im having problems with an extra space that appears before a comma when multiple citations are listed. Ive attached an image to show the exact issue. It appears as (114 ,115) and it should be (114,115)

There was also a space after the comma which I removed in the “multiple citation separator” when editing the output style. I cant find where to remove the one the appears before tho.

Im using Vancouver referencing style in endnote x9 and word 2016 for mac. Thanks for the help.

Have you modified the output style at all?  I am working with Endnote X8 still - and the style has a space after the comma in mine, but you can edit it to remove the comma - and to remove any space in front of the comma.  Or you can try to download a new version (In either case, “save as” to a different name, or endnote will continue to use the original one in the program folder and change the manuscript endnote ribbon to use the newly named output style).  I attach one below, in the zip file that I removed the extra space, and an image of the place where you would edit your own in the jpg file) 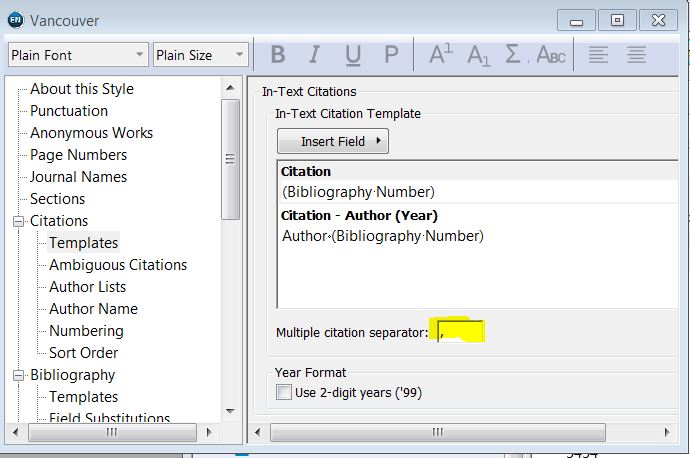 Yes, i have edited the output style as you described. Editing the outputstyle only removed the space after the comma (= changed it from (114 , 115) to (114 ,115)). So there is still a space before the comma that is not supposed to be there. My assignment is to be handed in soon, and I would therefor greatly appreciate any advise on how this can be fixed.

Did you try mine?