(1) Pages adds a close-parenthesis after every reference in the entire document following the inserted text (so this is worst for copy-pasting at the beginning of the document because it affects every reference thereafter).

I noticed this bug only today. When I worked on the document yesterday everything was fine if I recall correctly. I started using the plugin about a week ago.

I’m editing a long paper which involves a lot of copy-pasting of text pieces, which is kind of killing my paper right now

I already reported it to Apple but I guess they’ll need a while to fix it if it’s a problem on their end. I restored my document to yesterday’s version, but I can’t work on it any more

Has anyone else these problems? Thanks for any feedback!

Changes in the document also seem to affect the formatting (see before/after photo). The problem appears when I insert something I cut or copied before, and also when I delete a reference. Deleting normal text is no problem. 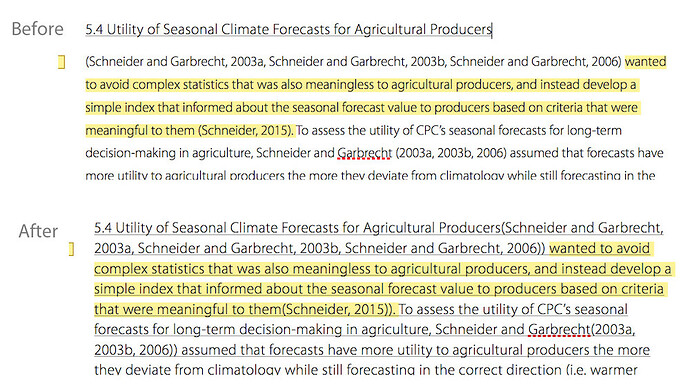 maybe the problem is caused by parenthesis used in the document which do not come from EndNote (e.g. for your own comments).

If you change the the following settings in EndNote:

EndNote > Preferences > Temporary Citations > Temp Citation Delimiter > set parenthesis which you do not use in your document e.g. […] > save the changes.

maybe the problem is caused by parenthesis used in the document which do not come from EndNote (e.g. for your own remarks). Perhaps they are clashing with the parenthesis from EndNote.

If you change the settings in EndNote:

EndNote > Preferences > Temporary Citations > Temp Citation Delimiter > set parenthesis which you do not use in your document, e.g. […] > save the changes.

Unfortunately that doesn’t solve it. I used {} for temporary parenthesis. But the phenomenon looked different anyway, as I described earlier. It looks like it’s a bug, maybe because the EndNote plugin for Pages isn’t authorized by Apple.

I managed to solve the problem by restoring an earlier version of the document with Time Machine. In that one everything was the same compared to the other version that had the bug, except the bug wouldn’t happen. It sounds strange but that’s how it is. I’m working with this version since then, adding and removing references and moving things around in the document, and I had no trouble at all.

It is my understanding that Apple wrote the plug-in for Endnote, so it can’t be because it isn’t “authorized”.  The compatibility lists it as “Partner integration for Cite While You Write: Apple® Pages ’09; Apple® Pages 5”.

But in my world, I never update one package to another, when two need to work together, unless I have to, or early adopters report it works and it is better.  If I were planning on using Endnote, I would still be using Pages 09 I guess, or bite the bullet and use Word.  Especially as Apple seems to be in no hurry to fix the plugin after each update. And nothing has been improved since 5.2 as far as I can tell, which still had glitches.

The KB article on Pages and EndNote that should reflect any updates as the add-in is improved is here.