I’ve recently upgraded to Endnote X6 for Mac OSX and I cannot figure out (if it’s still possible) how to customize the toolbar - specifically, I’d like to use the colored bigger icons and add/remove items, as it was possible to do in X4 (under Tools, Customize Toolbar).

Thank you in advance.

better to replace most toolbars with control areas closely integrated with sub-components of the window or view pane.  Among other considerations, this design creates a more immediate context for control actions. We do include customizable toolbars for a few secondary windows where a toolbar offered users the most flexibility. The attached screen shot highlights some of these changes.

This general design approach is consitent with other Macintosh applications that have a feature set of similar power and complexity to EndNote’s. These design improvements were validated by our team of user-beta-testers during our development of version X6 for Macintosh.

Of course, not everyone will agree with these design choices and we certainly appreciate disenting viewpoints. If there are specific workflows that you feel would benefit from different customization options, please let us know what these are and we will consider further refinements for the future. 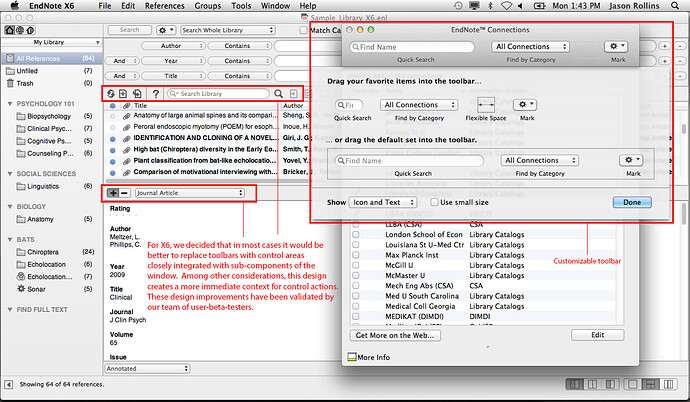 Are the Word2011 Endnote X6 integration, now on the ribbon, or is it still a “stand alone” toolbar that floats around.  I was suprised when I was recently helping a user on the Mac platform tha X5 was still a floating toolbar?

It is still a floating toolbar. I agree that this is a less than idea design but as far as we know - and have been told by the Microsoft Mac Office team - Microsoft does not offer ribbon integration for third-party add-ins on the Macintosh like they do on Windows. If / when they ever do offer this option, we will take advantage of it and integrate with the ribbon - just like we do on Windows.

The problem with the “control areas” is that, quite simply, different users have different needs.  There is not a single button in X6 that I use routinely, although I will use about three of them from time to time.  In previous versions, however, I used the “import reference” button many time per day.  It took very little effort to move the mouse a small distance to the button; it is a much greater effort to move to the File menu and choose Import.

If you are going to set up toolbars that are integrated with subcomponents, that’s fine, but they need to have the buttons that we use.  Not the buttons used by a majority of beta testers, but at least the capability of having the buttons used by each user.  While I need the import button constantly, others might need the export button, or the export formatted, or a specific connection, or the term lists.  With the old customization this was at least partially possible.

I’m interested in your statement that this is consistent with other Mac applications with simplar power and complexity in their feature set.  Can you tell me what applications these were?  For example, I find FastTrack Schedule to be of similar power and complexity (actually lower power, since it can’t integrate directly with other important programs).  Yet it is easy to customize FastTrack’s toolbar.  It is easy to customize Word’s as well, and that program is significantly more powerful.

I have to agree with russtms1 that it is disappointing to lose valuable features in the Mac version of Endnote 6, such as the import button on the toolbar (and the ability to customize the tools there).  I have used both the Windows (v. 6) and Mac (v.5) versions of Endnote, and the import button is one of the buttons I use the most in those versions. Please add it back in your next update.

It would also be nice if I did not have to go through the font menu (Edit/Font/Show Fonts…) to simply make text bold or Italic in the Mac versions.  It would be nice to be able to use keyboard shortcuts (as with underlining) or to have the buttons in plain view just like at the top of this message window.

Thanks for your consideration.

Please give us back generally customizable toolbars.  The basic EndNote position presented above is that they have put a lot of thought into the design and tested it with focus groups.  That is great.  But what does that have to do with denying end-users the ability to make the product work even better for their needs?  You can do both, they are not mutually exclusive in any way!

I agree that the customization should be re-added to X6. I was very disappointed with the interface changes. I find this version is more awkward to use and the small grey icons are ugly and not at all intuitive. They should be large enough and have distinctive colors and patterns so that they are easily distinguished with a quick glance. Those in X5 were easy to spot and remember. And I also used the import button constantly. Please bring it back!

I just upgraded from X5 to X6 on the Mac. While I like the new Mac-like UI, as well as the new reference window, I am also disappointed that the toolbar of the library window is no longer customizable. The only button in the default toolbar set that I would ever use is “New Reference.” Even then, because all the buttons are so small and grey, rather than large and colorful like they used to be, even this one button involves slow hovering with a mouse and is hardly better than right clicking to execute the function from the drop-down menu. I am not programmer, so I can’t say why a vital feature such as toolbar customization on a software program that professional academics use every day would be stripped out of it. A very technical explanation has been provided here, which a lay person such as myself cannot completely understand, but perhaps some insurmountable challenge was experienced by the Endote design team that made it absolutely necessary to take out this common sense feature, the only (undoubtedly unintentional) result of which is to frustrate users and compromise their productivity. I am also not sure about the claim that other Mac programs have removed toolbar customization. Something so illogical would surely be unthinkable. I can customize my toolbar in every Mac program I use (Apple Mail, Scrivener, Preview, Firefox, etc.), so I am not convinced by this explanation. Oh, and I was wishing that one would be able to search within the reference window in this ostensibly “upgraded” version of Endote, for which I paid a considerable sum of money. But no matter how many times, and how hard, I press Command-F when I’m in my reference window, I simply cannot for the life of me manage to search within the text of my lengthy notes. So, I do what I did in Endote X5, which is to copy the text from the Notes field of my Reference Window, into Apple’s TextEdit which, like all good Mac programs, understands what Command-F does.

JasonR, your company should listen to actual users, not satisfy itself with focus groups. What you’re saying is, “we know what’s better for you”.  This Big Brother approach does not sit well with academics who are one of your main targets. We pay for the software, and all we ask is that you give us more than one AWKWARD way to import or exprot references, exactly like we’ve always had.

Your focus groups may not realize it, but when one uses a large monitor, clicking right above the Endnote window in the toolbar is so much easier, than being forced (thanks again for that one) to moving the mouse all across the screen, over to the menu bar of the OS, just to access the File drop down menu. VERY tedious. And we can’t even invoke this command by using a power key, which would be an acceptable alternative. Nope, we’re denied that one as well.

And did your fiocus groups realize that many users must import references several times a week? Bah, let them move their mice, right?

Removing a useful and easily implemented feature is in itself a questionable choice. This issue alone would make me happily revert to my previous version, if the latter would only play nice with Office 2011 (which is not the case).

This request for a customizable toolbar is very easily implemented, so you should definitely give it back to us. And your compaby’s continuous claims about improving the software would sound a lot more credible. But who knows. Maybe usability and customer satisfaction are also in the hands of focus groups…  Please convince us that this is not the case.

I’ve recently upgraded to Endnote X7 for Mac OSX (from X5) and I am afraid there is no chance to customize the toolbar… Am I rigth?

I strongly suggest to recover this option, for many of us it was quite useful to select our own preferences for the toolbar.