I tested the beta x7.5 with word 2016 on mac. It worked perfectly fine till it crashes when I tried to fill in a new reference. Then I updated on final x7.5 but I have the same problem. I already tried this:

It ist not working. A new installation of word and/or endnote does not help as well. Here is the logfile:

Can anybody help? I don’t have any solution anymore.

We are seeing the same thing - crash upon trying to insert a citation.

I find that X7.5 only started crashing Word 2016 after I started inserting textboxes into my document. If I don’t have any textboxes, it works just fine. After I instert a textbox, it creashes every time I try to update the bibliography or add a citation.

I tried the Beta when I started using office 16, and it crashed word. Word would simply freeze on the welcoming screen and then crash.

Now again, with this “stable” version. I updated endnote and it’s the same problem again. I uninstalled both and installed them again. Don’t think it’s my Word as word functions perfectly normal without endnote’s presence. As soon as I install endnote again, word starts freezing and crashing again.

I posted previously on the forums requesting help, and I have contacted custmoer support in every continent, and still no response from you guys.

PLEASE help and respond to our inquiries! Thank you

Did anybody find a solution for this? Endnote is not useable with this bug anymore.

Has anyone figured out a fix to this bug? I was able to format my bibliography using the beta version, but once I made the switch to the public version, it crashes everytime I attempt to update my bibliography.

I highly recommend that anyone with this kind of problem, call endnote support.

Reach someone who can help

Here are some things I would suggest for troubleshooting this issue:

* Make sure the library is not saved to a cloud storage location such as Dropbox: http://endnote.com/kb/115635

* Make sure the library is stored on the local hard drive and not a remote server for optimal performance.

Note: for Step 2 of those instructions, you would click the EndNote tab and then click the “Tools > Convert to Unformatted Citations” command.

* Click on the View menu and select Draft. This uses less of Word’s memory.

* Click on the Review tab and set the Track Changes option to “No Markup.” The change tracking will still be present in the document; it simply will not be visible. This can also improve performance.

My copy of Word 2016 (v15.18) also crashed whenever I update the bibliography with Endnote X7.5. This occurred after I followed Jason’s (Admin) instructions as well as the OP’s instructions. Another poster above already mentioned this, but the problem seemed to be caused by a text box in the document. When I removed the text box, the bibliography updated without error. Reintroducing the text box reproduced the crash. Hope this helps the developers troubleshoot this bug…

Result: It might be a bug lots of users have. They gave it to the development team and advised to downgrade on Word 15.17. I didn’t try it yet. Maybe it is going to work.

I have the same isssue.

Still the issue is not solved.

I have the same issue, Word 2016 for Mac crashes every time I try to insert a new reference. This has happened in two different computers, with several Word files and looks like it is some sort of bug. I have followed support instructions, but they didn’t solve the problem.

This is really frustrating after waiting so  long for a compatible version, I still can’t use Endnote for my work!

I have the same issue as well…

The only solution for this is to change to a Windows PC and Word 2016. Very stable and no problems at all.

Thomson Reuters support confirmed to me that this is a bug and that they don’t have any estimate of the timeframe to fix it. This leaves no alternative but to give up until they fix the problem. I can’t afford to wait any longer for a version of Endnote that really works with Word 2016 for Mac. This problem is showing up with almost all my files, no matter if it is a simple manuscript with two dozen references or one of my students thesis with hundreds of them.

I have ported all my databases to Mendeley and I am using it for now as a temporary solution. Endnote has a better interface and more flexible style edition, but it doesn’t matter if it doesn’t work at all… If T.R. takes too long to fix this, the temporary solution will become permanent and I will not come back to Endnote. It is very, very frustrating!

I am having the same problem. CWYW works up until I have pages worth of text boxes, images, tables, etc.

I messed around copying and pasting parts of the document that was crashing into a new document to see if I could isolate which component of my document was making Word crash upon trying to update my bibliography and it seemed as though it was the sheer amount of formatting and data that the CWYW plugin had to look through that caused it to crash because the larger the portion of my document I tried to use, the more quickly it crashed. There was an intermediate stage where it would begin to update my bibliography and then crash half-way through.

I have Microsoft Word 2016 for Mac and it is crashing when I try to insert references using the Word plugin. It is a shame that the University of Alabama pays money to Thomson Reuters for half of a product when that money could be spent on products and services that actually benefit graduate students. The school will be getting my negative feedback on the Endnote product. 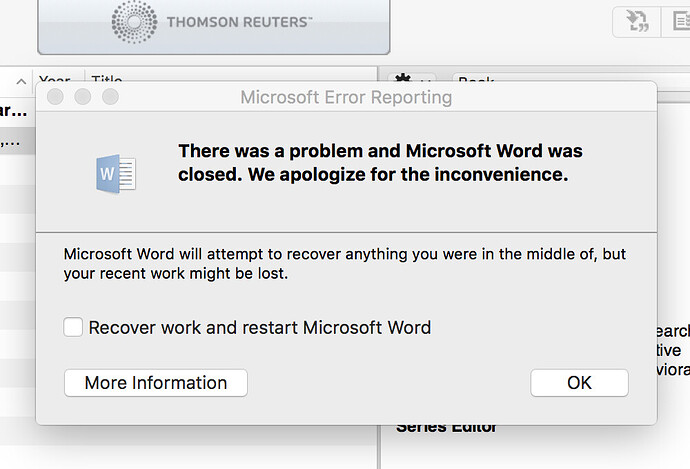 When will someone take this issue seriously? I am stuck with the same unusable combination of Word for Mac Version 15.19.1 and Endnote 7.5. This really is an unacceptabe level of service.

I’m having the same problem. It just crashes every time. Can’t really use this thing. Need help. right now!

Luckily I was able to download Word 2011 via office 365. With the older version of Word I got it back running.

When will the update be availbale to fix the bug?