I just upgraded from x4 to x5 by uninstalling x4 and then installing x5.  I am in the process of finishing a large report and x5 seems to be significantly slower in processing citations within msword 2007.

Any time I insert a citation, new or old, a progress box comes up as endnote apparently rechecks all of the citations and bibliography format.  With x4, I never saw anything like this, it seemd to run in the background, and never slowed me down.

I’ve also noticed that when I add a citation to a reference Endnote sometimes(unpredictably) jumps down to the bibliography, forcing me to scroll back through my document to find where I was editing.

I set endnote to open and close with word, which seems to make things work a little smoother.  However, sometimes when I close word (and consequently endnote) and then try to reopen later, endnote repeatedly crashes, and will not work until I restart the computer.

Thanks for your ideas 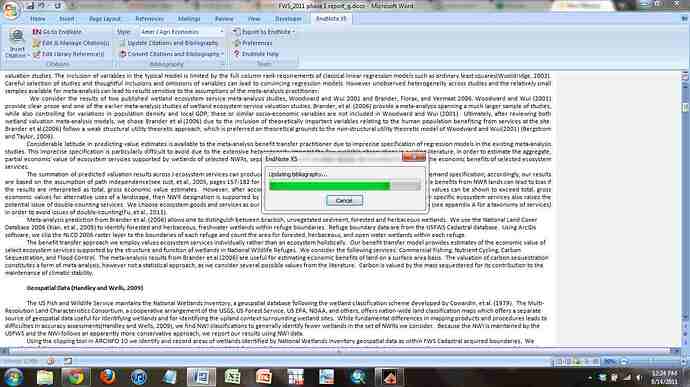 using an older revision of the document I did the following,

unfortunately the box still appears and when I added the citation, I lost my place in the document and ended up looking at the reference list rather than where I inserted the citation.

The crash problem is a minor issue.  I cannot consistently reproduce it, but I will try starting with endnote open if the problem comes up in the future.  The slowness of inserting citations while writing is the problem that has me considering reverting to x4.

I use MSword2007 and X5 and don’t see the problem you describe.  In addition to unformatting, do try a select all, unlink fields in Word, and then reformating.  It sounds like you might have a corrupted ref which persists after an unformat. See if that repairs the document.

Hi - We are tracking a performance issue but that wasn’t introduced until X4.0.2. When you say it didn’t happen with X4, were you working with X4 with the latest update? If so, I wonder if this isn’t a document specific specific issue. Does this happen with all documents formatted with EndNote, some, or only  this one?

We are always interested in looking at customer documents when we’re investigating an issue and verifying fixes. If you’re interested, please send me a private message with the document.

This kind of slowness, especially when paired with a jumping cursor, can also be caused by damage in the document encoding, so another thing you may wish to try is cleaning up the document field codes. Make a back-up of your document and then try the steps we have here.

Let us know if this helps!

I’ve unformatted and pasted the document, but the steps do not say how to reformat.

Does reformat refer to (convert citations and bibliography) ->(convert word citations to endnote) ?

assuming that the answer to my above question was yes, I selected all the text and chose that option.  Now endnote is giving me a “database error: please verify that no other user has this library open simultaneously with write access…”

so in order to make recover from this problem I restarted my computer.  endnote still has the database error.  So I chose “recover library”  and 0 references were recovered.  it feels like this is going downhill fast…

so fortunately I had a backup copy of the library and was able to recover nearly all of the references.  I still don’t understand how or why this happened, but I presume it relates to having the original document still open.  If I have two documents open must they use separate endnote libraries?

after doing the reformat the problem persists.  I will e-mail my document to the fellow above who suggested that as a choice.

No, having two documents open at once would definitely not cause that. I think there is damage in your library which may or may not be related to your original issue. It may even be present in your backed up copy, so I would highly recommend making a backup now and performing the recovery process on this copy of the library immediately, just to be on the safe side.

I reformatted as you suggested, but the dialog boxes persist when I add a new citation for a new or old reference.

I messaged Mathilda/medmunds with my library and document, hopefully she can provide some insight with these materials.

Thanks for your time!

I am having the same problem. Insertion of a single new reference (or even copying an already inserted reference to another place in the document) causes a delay of at least a minute, usually more (as long as 4 minutes on one occasion), during which neither Endnote nor Word 2007 can be accessed. On occasion the process seems to get stuck altogether, and the only way out is to close Word, losing all unsaved changes. I have unchecked all options in the preferences tab, except for “Turn off showing field codes” (I tried unchecking this as well, but it didn’t solve the problem, and the document was an optical nightmare).  I also upgraded from the patched version of X4, which worked fine.I am at least grateful to hear that I am not alone: is it possible to download a copy of X4 to use until this problem is solved? It is causing major losses of time and patience.

What version of Windows are you runnning?

Did you uninstall X4 before installing X5?

Yes, I always uninstal before re-installing programs; unfortunately, I didn’t save the X4 setup file so that I could go back, as this has never been necessary before.

I’m not sure what you mean by un- and re-formatting.

Thanks for the information. By “formatting/unformatting” I meant to reformat your document. Use a backup copy of your original document, then locate and click the EndNote tab in the MS ribbon. Also have EndNote open to the appropriate library, then click on: Update Citations and Bibliography (see attached image).  Save the document, close both EndNote and MS Word then relaunch both programs.

Thanks: but no, that doesn’t work, either; in any case, this problem has persisted for some time, so that not only have Word and Endnote been closed many times, the computer has also been re-booted many times. I’ll see if going back to X4 helps.

I wish to second (or third or 4th) the problem, which needs to be documented. X5 is very very slow. I’ll stick to X4 for now:

Incidentally I don’t believe I am missing all that much by not upgrading to X5. Most of the improvements are to do with PDFs (yawn); one very nice improvement is the ability to insert a reference with neither date or author, or one or the other, and not have an extra space after the insertion (a bug or oversight in X4)