X7 Compatibility for Word 2016 for Mac

We are actively developing a patch for EndNote X7 to fix this compatibility issue. We anticipate this free update to X7 to be ready by the Fall. We understand EndNote’s importance in completing your work and apologize for any inconvenience caused.

We understand & appreciate EndNote’s importance to your research workflow, and have developed recommendations to enable your continued use of EndNote while we work on the patch. Please visit our Knowledge Base for more information and to view recommendations: http://bit.ly/1LCTFUQ

Any news regarding a specific date for the availability of the patch?

Just wanted to remind Thomson Reuters that Fall in the Northern Hemisphere is September 18th.

Any news about the updated for Word 2016?

Any news about the release of a new Endnote version working with Word 2016 for Mac?

Testing on Beta builds of Cite While You Write with Word 2016 for Mac has begun. Go to http://endnote.com/betasignup to get started. Let us know how the beta is working for you.

The Endnote x7 beta works great on my mac. But there is one problem I just found. If the “instant formatting” is on, inserting a citation will cause the collapse of the Word 2016. But, luckily, if I turn off the “instant formatting”, everything works fine. In addition, is there any way can I get the floating endnote window back when I am using Word 2016? It is very inconvenient for me to adjust the bibliography style.

I have replied to you privately by email with information on how to report bugs and where to find information about known issues and feature which have not yet been implemented.

It’s December 2015 and still waiting for this compatablity issue to be resolved between windows office 2016 and endnote. Any news ?

A beta is in progress. It has its limitations, but at least I can get work done without having to revert back to office 2013. It seems overall stable.

I have downloaded the beta version of X7.4 for Office 2016. Can I install it if I don’t have a single user license of X7 on my mac? I have a license from my university. I really need to use the programme!

Thanks in advance for your anser! 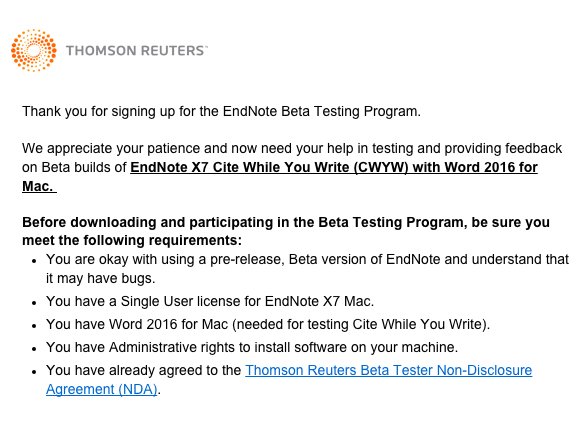 At this time, the Beta program is limited to single-user license holders only. I apologize for the inconvenience. If you have a site license of EndNote X7 and cannot obtain Word 2011 or 2008, you can use the Format Paper feature with Word 2016 as outlined here:

This has been ongoing for months now at this stage. You really need to sort this out - it’s beyond ridiculous!

I agree… this is taking way too long!

This has been ongoing for months now at this stage. You really need to sort this out - it’s beyond ridiculous!

I absolutely agree. This is utterly unsatisfactory and makes me want to start looking for alternatives. Please get this sorted.

beta v2 was working fine until I updated Word to version 15.18. Now it crashes Word while updating citations and bibliography. A new fix is needed for Word version 15.18.

To Thomson Reuters: it is taking way to long to release this new patch. We were promised to have a solution by Fall last year. The beta has been out there for almost two months.

Since I really need to get my work done, I am seriously considering to try other options if 7.5 is not released soon (and I mean in a few weeks).