I need a hand with how citations are displayed in my paper. As a standard, EndNote display citation in following form: “(Author, Year)” and new citation display “Author (Year)” etc–this form can be found practically in almost every style. In my paper, I also have to cite standards such as BS EN ISO 9614-1:2009. As you can see, it is not in the brackets. Because we cannot use two different style in one document, I had to drop brackets in my copy of style and put them manually in text. It works alright for “Author, Year”, but it does not work for “Author (Year)”.

I set the fields “Citation” and “Citation - Author (Year)” as follows:

And the result are shown below:

I would be grateful if someone could help with that. Thanks

If you use EndnoteX5, it has an option that achieves what you are requesting.  Otherwise you might consider the workaround I previously suggested in this thread.  Getting the , and ) to resolve otherwise, can be difficult.

I do indeed use EndNote X5. Can you please tell me which option do you mean? If you mean to set “Display: Author (Year)” it is what I am trying to do but it does not work.

, 1982 - this does not look correct after changing to “Exclude Author”
Fields and Walker, (1982 - here the last bracket is missing

Thanks for your reply.

I followed your instructions and It’s worked for the comma (1) where you have suggested to move it before separation mark “|”. I have realised that I have to choose either to get rid of the comma after of before YEAR.

However, in terms of the last bracket (2) It did not work

In Word 2007, there’s still missing last bracket, even after forcing it by writing this: ). In attachment, you will find how I changed the style to make sure I am using proper charcters between which I had to enclose the bracket: " ` ".

The result are as below:

I don’t know if it’s bug or I am doing something wrong. It is not urgen but in about 1 month I need this to work. Otherwise, I’ll have to stick to one of the workarounds such as the one suggested by Leanne. 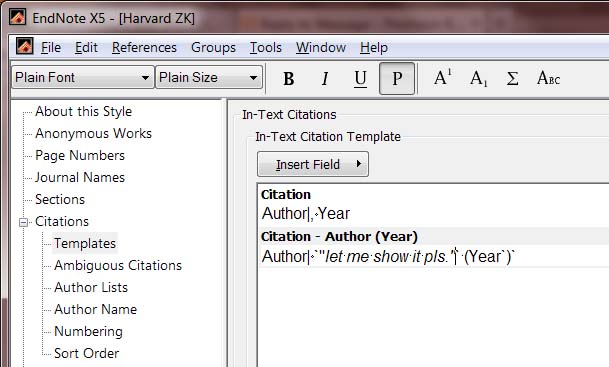 This is exactly what I meant by my comment “Getting the , and ) to resolve otherwise, can be difficult.”  I know this comma problem you have encountered at least has been discussed extensively back in the old days, and I can’t remember if there was a better solution, and can’t seem to find the thread.

The missing closing parenthesis seems to be because the Citation field doesn’t have one.  If I revert the usual (Author, Year) format, then the trailing parenthesis appears just fine in the Author (Year) displayed citation.  So this must be inherent in the way the developers decided to implement the Author (Year) citation and you may have to request the developers to see if they can fix it…

I’ll write to technical support and find out what they do think about this. It’s I think only left to thank you and CrazyGrecko for good intentions of helping me.

ZikO - Is the style treatment you are using tied to a particular style guide/journal?

I am sorry I am not sure what are you asking me about. I have just changed a built-in style to my own preference and saved that as a new style.

BTW, I reported this issue to technical support long before the patch 5.0.1 was released and they promised to forward it to developers. At the moment, after the patch has been released, the issue is still there. It’s looking like nobody really cared and I feel a little bit like being ignored.

She is just asking for written instructions so they can match the requirements of a publisher.

I don’t have to follow any instructions. The problem is that common papers are reffered via Name (Year) or (Name Year). We can use the form Name (Year) or even exclude Year. I don’t know how to do it with British Standards. British Standards are cited as BS 1234-1:Year with or without brackets etc. whereas in Reference list they appear as “British Standard Institution. (Year). Title – Part X: Subtitle (BS 123456-X:1234). London: BSI. Source”. I don’t know how to set style to fulfil this, simultaneously having control over keeping brackets or not.

I hope it explains my problem.